Living in Texas, I have been appreciating lighter weight woven summer clothing, linen being one of choices. I was out on etsy looking for handmade linen clothing and found a beautiful jumper. It was designed to be worn with a tee shirt and leggings, and was darling. It was more than I had at the moment to spend, but one of my friends gave me the challenge of : "you can make that, you sew." :) Nothing like a challenge to get the creative juices flowing. I have several A-line dresses here and laid them out on the table, on top of some paper. Traced them, added a seam allowance, increased the size of the armhole, made a V-neck, added a pocket, and an asymmetrical hem. I went to JoAnn's Fabric and found linen, it was on sale and I bought it for a great deal of $17!!!

As I was getting ready to cut the dress, I had a thought, "maybe I should do this first from a sheet?" Good idea! So, I went scrounging around the sewing room, decided not to use the sheet, but to use a piece of white shirting. I didn't care, at that point, about it draping, it was after all the prototype.

I did get it sewn and the pattern did work, with a few tweaks. Then, I looked in the mirror and thought, I look like the Michelin man in this thing! The fabric had enough polyester in it to cause it to stand straight out from my body! I had to fix this.........Mind you, this was only to be a prototype.

So, I sewed on some doilies, thinking that would help, adding weight to the fabric, maybe it would hang instead of sticking out. Nope. Then in the middle of the night, when all people are to be sleeping, I was thinking of this thing(no longer jumper). I decided to dye it purple, I had cotton dyes! It became purple the next day, I also added tie dying to the effect. WELL, I knew this might happen, hoped it wouldn't, but it did.

The sewing thread was polyester......... It stayed white. My doilies took the dye beautifully, but the white thread looked terrible... Groan... visions of seam rippers danced in my head and it is just a prototype....... 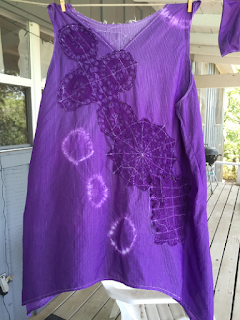 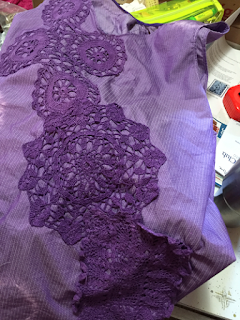 I have to admit, the hours and hours were worth it. I have made the real one now and am enjoying wearing it.

I am taking part in a knit-a-long on Ravelry, with the Curly Girl group. The project has to be something for your head, hands, or heels. I have had the pattern for the Sheeps Heid pattern on Ravelry sitting on my desk for several years. The pattern is written by Kate Davies, here is the link. 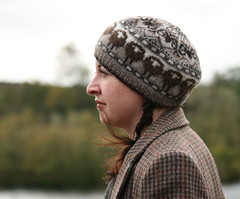 This photo is from Kate Davies Ravelry listing and it is a Kate Davies Photo.  It is a picture of her, and her beautiful hat, not me or my hat. :)

Here are my little bags of yarn. I purchased Madeline Tosh yarn for the project, they had mini skeins available in their store when I was there one time with my friend, Debbie. 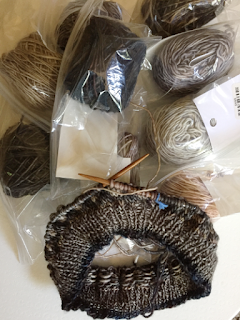 Now this picture, below, was taken at Barnes and Noble, in the Café. We will go there to get Starbucks sometimes. We did that on Friday, because the drive thru and parking lot at the regular Starbucks was closed, they had just resurfaced it.

Anyone have an idea of why there are these white balls, that look like they are handmade from cotton balls, hanging from the ceiling?  They look like giant snowballs, but it is 100F outside. Are they helping us cope, reminding us that winter will return? Hmmm......... 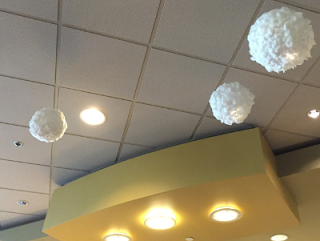 Posted by Joanne at 1:13 PM No comments: