A couple of weeks ago, we went to an antique car show. We had a great time walking around and looking at "antique" cars. It was funny to think that some of the "antique" cars were built AFTER I was born. :)  Nevertheless, they were fun to see and also, to see the immaculate care and restoration of the cars that the owners take. One of my favorites to see is always seeing the Camaro's from the 1960's.
However, that isn't what I decided to show you. I just was amazed at this lowered Hot Rod! I don't think that I have ever seen a car this low to the ground. Even Jeff's Miata's aren't this low. Truthfully, I was thinking you may actually have to get down on your hands and knees to crawl into it. 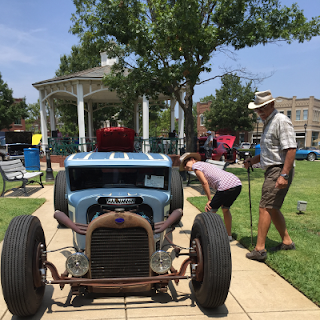 Finished my socks! These socks probably have been the quickest socks that I have knit in years! I had decided to knit them on double point needles. When I learned how to knit socks, back in the late 1990's, I had learned on double point needles. When the Magic Loop and Two Socks on Two Circular Needles became popular, I gave them a try. Although it is nice working my socks on them and making two at a time, and working toe up, I was missing my four needles.
I did use only four needles, not five. That is how I learned. My dp's are old, I guess in car terms they are "antiques." I inherited them from my aunt and my mom, so they are metal and came in packs of 4. I just looked and the company, on some of the packets that I have, is named, "Marcia Lynn."
Anyway, I discovered that my suspicions were correct. I knit socks faster on dp's. I guess the fiddling with the circular needles just takes up that much more time and you really don't have to do much adjusting and fiddling with dp's.
I know there are folks that enjoy the process of knitting and I do also, to a point.  BUT if you can finish a project and get another one started, isn't that as much fun?? Finishing and starting! 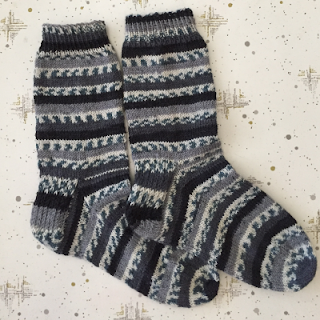 I just launched this pattern, Springtime Fling, on Ravelry this week. It uses lace weight yarn, larger needles and is worked top down. For the needles you use a smaller size for one row and a larger needle for the next row, then back to the first needle for the 3rd row. 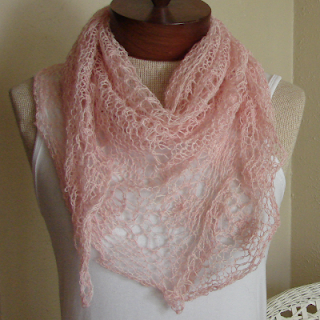 You alternate needles all the way through the pattern. The smaller needle gives the body that the lace weight needs and the larger gives the shawl/scarf a great airy and lacey feel and look. 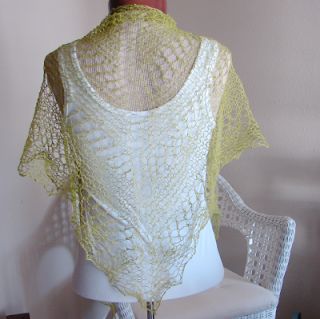