My mom originally found this recipe in a Pennsylvania Dutch cookbook, that she had purchased when we visited the Lancaster County area of Pennsylvania.  The area is a wonderful place to visit and some of my favorite memories are of trips I took there as a teenager and again as an adult.

Anyway, back to the recipe.  I love to bake and I love apples.  It doesn't have to be autumn for me to bake with apples, I will use them any time during the year.

One way that we love to eat this dessert, is with vanilla ice cream.  But, it is good plain too. I am going to write the recipe as it came from the book and then my adaptations, will be in ( ). 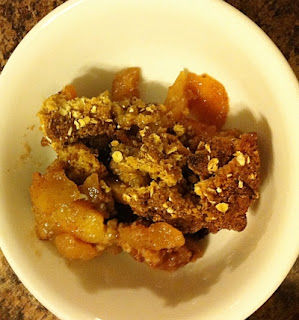 ﻿
Pennsylvania Dutch - Apple or Peach Strudel
Into the bottom of a buttered baking dish(9x9 inch), put thick layers of apples or peaches.
Sprinkle with a mixture of sugar and cinnamon.*
Dot with lumps of butter.
Into mixing bowl, combine:
1 cup sugar (1/2 cup granulated, 1/2 cup brown)
1 tsp baking powder
1 cup flour (1/2 c flour, 1/2 c quick cooking oatmeal)
1/2 tsp salt
Add one egg to this mixture and mix until crumbly. Spread over apples, bake in moderate oven (350 F) until crust is brown and apples tender. (30 minutes)
Serve plain, with milk, whipped cream or ice cream.
*Cinnamon/Sugar = 1/2 cup sugar + 1 Tbsp cinnamon.
This recipe is a family favorite, I hope you will enjoy it too. :)
Posted by Joanne at 4:11 PM 1 comment:

﻿Squirrel - 3 points, Humans - 0 points
For the third time in 2 years, that dastardy squirrel has eaten the wires in the Blazer and tried to build a nest.
Again, we had it towed and Knit Girl (my Blazer) has now returned safely.  Turns out, this is quite common according to the tow truck driver.  On Friday, he had towed another customer's car for the same reason. It was fixed and returned home, that evening. On Monday that SAME owner called to have the same car towed back to the shop, because the squirrel had attacked again, that fast!  The tow truck driver has figured out the issue. Yippeeee!
Seems the newer cars, mine is a 2000(not so new anymore), have wires that are wrapped in a SOY (yes soy) based polymer type coating. The squirrels have discovered it and are eating like crazy.
Watch out, no car is safe now. :) The news is out on the squirrel radio's and tv's.  They are attacking.  Never mind that they have to eat the copper wire inside that tasty soy treat, it is worth it.  :)
So, our mechanic has wrapped the wire treat in black electrical tape, in hopes to scare the squirrels off. We also put moth balls under the car in hopes that this will deter them as well. 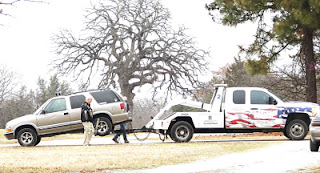 I finally decided what sweater to knit from my 1800 yards of handspun yarn. The Tweedy Aran Cardigan from Interweave's Knits Magazine. Sweater is started, don't know how long it will take to finish. Maybe for next winter, since I am not going to make it for this winter. Where is winter anyway? 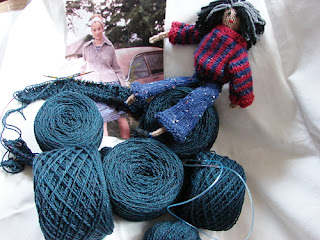 Then, like all Americans, we have watched in horror as our gas prices have risen steadily at the pumps. The UPS Store guy, is also a Mechanical Engineer. He has been researching, for several years, what smaller older cars are still running well on the roads and watching for them to come for sale. You see, years ago in the USA, we had cars that had great gas milage. One of those was the Mazda Miata.  I now have a 1993 Mazda Miata, that gets 32 mpg. :) That should help the gas bill a bit, don't you think? Oh, and Lacy Girl (my Miata) doesn't have Soy based polymer on her wires!  Yippeeeee! 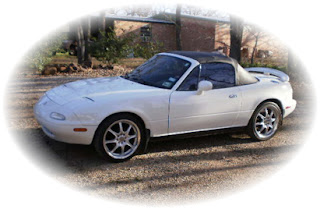