I have always thought that there should be a better way to knit short rows than wrap and turn.  It always seemed fiddly to me. This morning I was on you-tube looking at videos and found this one on German short rows! It really looks good, although I haven't tried it yet.  She has a second video if you need to work the short row on the purl side.

Once in a while, my brain wants to see "what if I do this when I knit this item?" So, that leads to an experimental item and maybe a pattern and then again, maybe not.

Below, I took one of my basic shawl patterns, Terrific Shoulder Shawl (found on the linked page) and the "what if" question was, "What if I increase every row at the center back?"  I wondered if it would make the sides longer, since it would be growing quicker, or if it would take the point longer down the back. 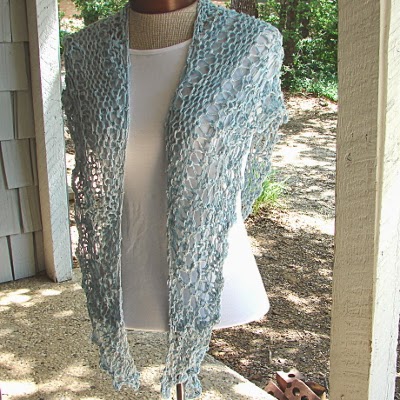 I also increased at the ends at a quick pace, every row, so the front grew quickly, and threw in some rows of *K2tog, yo* repeats for a lacy look. I used a yarn, that was comprised of several strands of yarn from several different balls of yarn. It was all cotton and made yarn weight of heavy worsted to bulky.  I used a large needle, Size US 13 (9 mm). I love the look of this shawl.
Ok, here is the surprise shape of the back.  :)
﻿ 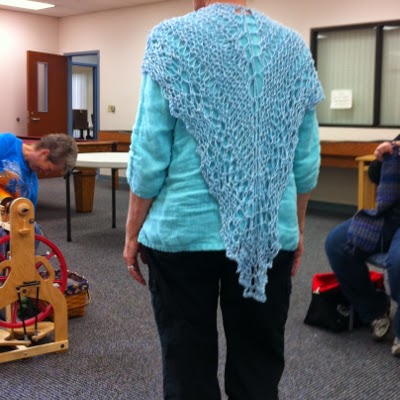 The point does dip down quickly and I do like the shape. The back point is actually equal to the two front points.  Yet, it is narrow across the shoulders.

I am participating in a handmade washcloth project for M.D Anderson Hospital in Houston Texas. The info for this project can be found here. Basically, the washcloths are going to the cancer unit there and they are given to the patients when they are done with their radiation treatment, so they can wash off the last remaining marks from the treatment.

One of my washcloths is a pattern that I love to knit and have used to make many washcloths and dishcloths.  It suddenly dawned on me that maybe others might wish to make a washcloth or dishcloth from this pattern and maybe I should write it up.  :) So, I did and then decided I would give it away for free here on my blog and on Ravelry as a PDF.

If you find a typo in this pattern, please let me know so that I can fix it. Thanks! 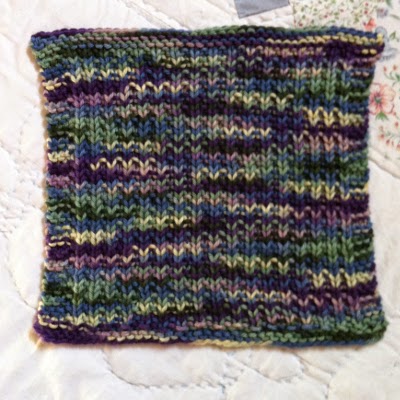 This pattern stitch is one of my favorite stitches and holds wonderful memories in it for me. When I was young, my mom knit many pairs of mittens for me and she used a knitting pattern that included this stitch pattern. So, when I knit this pattern into something, I think about my mom, her knitting, my mittens and playing in the snow.


Gauge 20 sts and 24 rows = 4 inches in pattern stitch. Gauge isn't really important, since this is not a garment that will need to fit someone.


Next Row: Knit and Bind off all sts.

Or, I should probably say tote box, or maybe the title should read, "A Walk Down Memory Lane."

I worked on this project a while back and had a lot of fun making it. Many, many, many, many years ago, I had made lunch boxes into purses. I was either in Junior High School or High School, so late 1960's or early 1970's.  We used them as purses back then.  One time, recently, when visiting my mom, I saw that she still had hers and had her crocheting in it!  What a great idea! Except, that after some 14+ moves in 40 years, mine is long gone......

I decide that I would make another one!  Yes, that is it!  I can use pictures from knitting and crochet magazines, making it a green recycling reusing project to boot.  Off I went to find the black lunch box. Well, that was a sad time, no one apparently makes them anymore.  Is that true?????  I went to several stores, none. I went to the big box hardware stores and the little independent stores, none.  It is funny, at the little store, the guy was younger and when I asked for it, he gave me a puzzled look!!!  I thought, "am I that old??"  So, I explained that maybe his dad had had one, then he remembered them. "Ohhhh, no we don't have those, I haven't ever seen them here."

The hunt was on.  I new I could find them and I knew just where. Canton, TX.

The next time Rebekah and I headed off to Canton, the black lunch box was on my list. I actually found two of the "old fashioned" lunch boxes! My first requirement was met.

Second, I went through my knitting magazines and pulled out the items that I wanted to save. Then I went through the same magazines and cut out all sorts of pictures of knitting, crocheting, yarn, spinning wheel and fiber items. I cut them fairly close and then trimmed them, when necessary, as I used them.

Third, I used the good ol' Elmer's glue(old fashioned too), actually I used Elmer's glue stick, and glued all of the pictures onto the box, overlapping them when needed, to get total coverage of the box.

When finished, I sprayed it with several coats of a polyurethane, to seal and weather protect it. 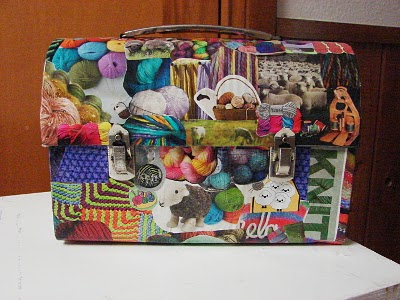 The front in all of its glory! 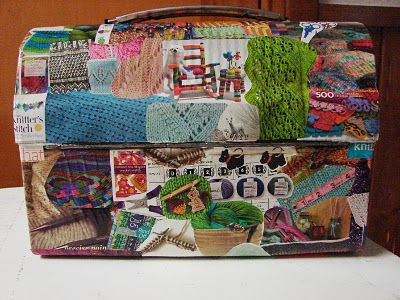 The back. I did keep some pictures together in the same area. Notice all the tools on the bottom portion of the back. I glued pictures on the bottom, too, even though I don't show that here. 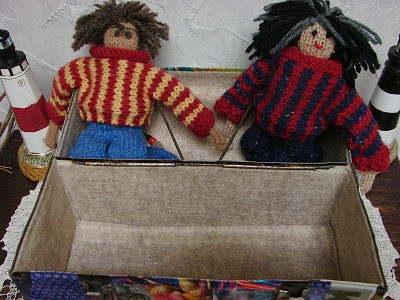 I lined it with acrylic felt, again using the Elmer's glue stick.  When I was done, I couldn't keep the Lil' D and JoJo out of it, they love it!!
The box holds a small project, like a pair of socks. Right now, there is a ball of lace weight yarn in it, as I am working on a lace weight shawl/scarf.
Posted by Joanne at 1:10 PM No comments: