We have had a rainy spring, which is good for us in north central Texas. It stayed cooler longer and we were all hoping that the dog days of summer, wouldn't ever arrive. Hahaha! Well, they did and they have stayed. I loved having a long spring, because I was able to spend a considerable amount of time out in the yard.

But before that, I had spent part of the winter watching You Tube video's about how to build a patio, with pave stones. I wanted to have just a small patio out in front of the house. When it came right down to it, I ended up putting it in where there was a flower/bush area up next to the house. That way, mowing the lawn would be easier.

I did do 95% of the work. I did get Jeff to help with carrying the pave stones, he is more the Hercules type. :) Have you ever lifted a pave stone?????

The first step was to measure out my area, pull up 6 bushes and roots, then dig the hole. Next, I poured in sand, leveled it and then "placed," more like heaved and hoed the pavestones in place, At this point, I was thanking God that I had decided on only a 3x4' area! Oh, yeah, then I discovered, the stones weren't centered under the window, so I moved each one 4 inches to the left. This window is my studio window, so I get to look out on my handiwork. 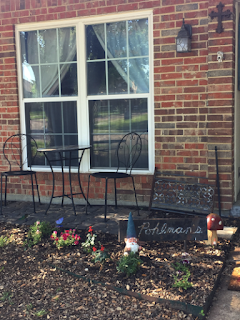 During the winter, I had also decided that we needed a raised garden bed. I did enlist the help of Jeff and his truck to help me in bringing home the cement blocks and dirt. I was careful to place the perimeter blocks, in between the sprinkler heads of the lawn sprinkler system.  In May I spent time with the grand dog, Skye, while her family went on vacation. 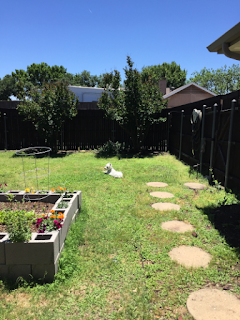 Here's a knitting hint. I have a new pattern that will be coming out on my TerrificCreations page on etsy, it will be named Butterflies. My local spinning/knitting friends helped me by testing the pattern for me. Pictures will follow for that.  I decided to knit another Butterfly with them, and realized that I have a trick that I do when a lot of stitches are on my circular needle and they want their freedom. I pull the needles so that the stitches are all on the cable, cross the cable and place a little girl's butterfly clip over the cord. This has been a real life save for me. 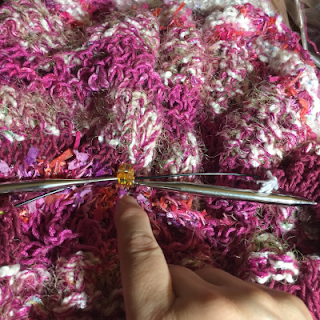 Posted by Joanne at 4:00 PM No comments: