The other day, I went over to my friend Laurie's home to get some extra spinning time in. One thing great about spinning is that, it can be a very portable hobby. Some spinners, when purchasing a new car, will take their spinning wheels with them. If the wheel doesn't fit in the new car, then forget it(the car, not the wheel). Spinners can be very dedicated to this hobby/craft/art form.

Well, the story behind this "new" wheel of Laurie's is a great story. Just so you know, Laurie has a Louet S-10, which is a great wheel and she has spun miles and miles of yarn on that wheel and will continue to spin on it. However, one day she went to look at a wheel that was advertised as an antique wheel. It was being sold, locally, by a person who was moving to Canada and didn't feel like moving the wheel again. Seems she had brought it to Texas, from Canada, some years ago. When Laurie walked into the room and took one look at the wheel, she was smitten and just gasped. This wheel was going to be hers, she knew it. She grabbed her cell phone and called me so we could talk about a double drive set up, she pretty much understood the "Greek" I spoke to her that day and decided the whee was, for sure, going home with her that day.

The wheel, will disassemble and fit into Laurie's car, so it is portable too. :) Thanksfully, she owns a mini-van, so she can get the wheel around town and has brought it to spinning since purchasing it. This is all good news for her husband. He doesn't have to worry about purchasing a new vehicle to fit the wheel. LOL!

I thought you might like to see Laurie spinning at the wheel that took her breath away, Arabelle. 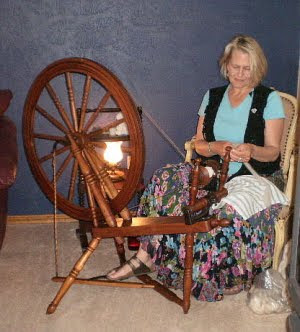 If you look closely at the wheel, you will notice some pieces colored gray or black. Those pieces are actually cast iron. This wheel is truly a gorgeous wheel and I am soooo happy that Laurie found it and was able to purchase it.

Here is a sweater that I have just finished. It is a size 6 months and is for sale in my etsy store.
I love to knit baby sweaters. This sweater is made from 100% cotton and feels so nice and soft. 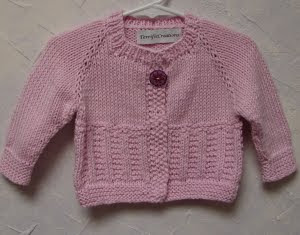 You know what it is like, when you send around you-tube links? You keep finding all of these funny ones. Well, this one was sent to me, by my daughter. Here it is:

It is wonderful weather outside, right now. We are having sun, warm temperatures, not hot, and cool nights. The wildflowers are blooming and I have seen some Texas Bluebonnets, our state flower out along the roads. Bluebonnets are a wildflower, and usually grow along the highways. Some people will stop along the interstate or highways, get their children out of the car, sit them in the bluebonnets and take the pictures. I probably won't do that, my kids are safe. :) Being they are 33 and 30, they will make their own decisions on it anyway. OK, I digress.

I wanted to show you two of my knitting projects. This black sweater, below is from the pattern Mr Greenjeans. It is a deep v-neck cardigan, worked from the top down. I just love those top-down patterns. Not many seams when done and I can try it on while I work. Below the armholes there is a cable and rib section. When I am done with the cables and ribs, I will put the sleeves back on the knitting needles and finish the sleeves. It will be a long sleeve sweater when done. 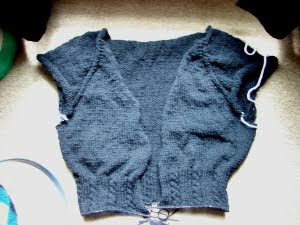 These purlple socks are made from a bulky weight wool and will be slipper socks. I made these in a knit-a-long with the knitters at my local library. We meet one morning a week, at the library, and knit. The name of the pattern for these socks is: Tropical Punch Slipper Socks. 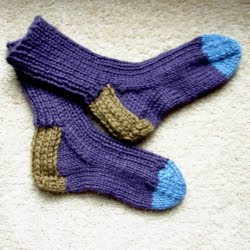 Both patterns are available on Ravelry, if you go out there.
Posted by Joanne at 3:19 PM 2 comments:

It all started a couple of months ago, when Liz wanted to make herself some clothes. She started looking on-line for mannequins and how to make one. One that will be your size, so that you can use it to size clothing, that you want to make for yourself. She came to spinning one day and asked if anyone wanted to do this with her? Does anyone want to start making some clothing for themselves? OR will anyone PLEASE come and help.

We asked her what was involved. She said, Duct tape(yep, duct tape), an old T-shirt, polyester fiberfil, and PVC pipe and maybe an old office chair(or something else for a base).

We were stunned. Was she serious?? Yep, she was serious. As we thought about it, some of us thought, cool idea. Let's do it. The date was set.

On the day for the project, 5 of us, I think, showed up. The rest of the spinning group was staying home, taking bets to see if we would REALLY do it. "We want to see them," they would say. :)

Well, after being taped for about 2 hours, and seeing our REAL body shapes, we became a little shy to show them to anyone else, that wasn't there.

I had promised pictures on my blog, but thought about it later and decided to crop out heads and hands. :)

It really is a pretty cool idea, if you want to sew clothing for yourself, though.

Below is what we looked like, from the back, when we had 3 layers of tape on. Talk about hot and sweaty. UG. We had t-shirts on and had two people taping one. This is not me and I am not telling who it is. LOL! 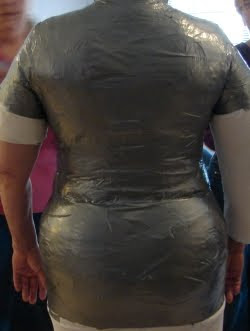 Before we were able to take our tin-woman costume off, we marked it with X's down the center back and lines at our waistline. Let me tell you, I don't want a corsett, don't even think about it.
See the X's(below), we cut along them, so we can tape the tin-woman back together. 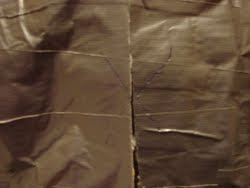 A look from further away so you can see more of the cutting. This is my tin-woman, by the way. 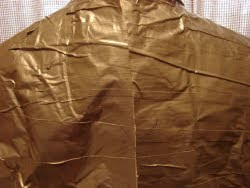 Below is mine, open. We cut through the t-shirt and it becomes the lining. The tin woman will be taped back together and now stuffed. I have finally purchased my stuffing, but need to work on the base before I can stuff it. 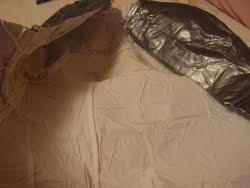 Right now, she hangs in the closet, feeling neglected and lonely. Some day she will be finished. But, I am busy knitting........
Posted by Joanne at 6:06 PM 6 comments: