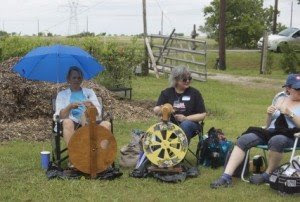 When I was visiting different blogs that had write ups about Saturday's knitting and spinning day at Jacob Rewards farm, I discovered a picture of Laurie and me spinning! Since I am typically behind the camera, I don't often get a picture of me.

OK, so which one is me? Hmmmmm. Here is a clue. I am a New Yorker, born and raised there. :) Yep, the one in a dark shirt and dark sunglasses. I know that color shirt was nuts, since it was kind of sunny, but it has an American flag on it and it was a patriotic weekend, right? However, I believed the weather man. It was supposed to me cloudy and cool, possibly rainy. Now, forget the shirt, look at those sun glasses. I love those glasses, we laughingly call them my Goldie Hawn glasses, cause they are pretty wild. Black and white zebra stripes around the edges. I did eventually get smart, like Laurie, and put up an umbrella so I could be out of the sun.

My wheel is an the Ashford Kiwi and my sister-in-law, Cathy, painted it for me. She did a great job, didn't she? That Kiwi is just a canvas, waiting for your imagination to take hold. :) It is a great wheel to take places, cause it sits nicely on the seat of the car and lets you put the seatbelt around it. It cooperates so nicely.
Posted by Joanne at 7:00 PM 3 comments: 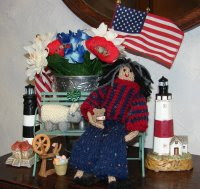 Memorial Day. The day when we remember the soldiers who fought for our wonderful freedoms and safety, whether they are still with us, or have passed on.

It can be said that I am pretty much from a military family. Although, none were in for their careers, they did, however, give up many years of their lives to serve our country, and they put their lives on the line for our freedom. The freedoms that we so enjoy today.

From the most recent to the past I want to thank: Our son-in-law, Chad(from the Bosnia era); and my husband, Jeff(Vietnam era). Next to remember: my Dad, Doug(who is listed as a WWII hero, fought in the Pacific theatre as a bombardier). Both my dad and mom had uncles in WWI and I had an uncle who also fought in WWII and a second cousin, who fought in Vietnam, he was shot up landing a helicopter to rescue the injured American soldiers. Actually, there are more in my family's ancestry too. My mom's Dad traced her family all the way back to their European roots. I do have ancestors who fought in the Revolutionary war and the wars after that war.

I remember back in the late 1980's we took a trip to Philadelphia. I was able to take the girls around the city to see Independence Hall, the Liberty Bell, Thomas Jefferson's home, a statue of Ben Franklin(made from pennies!), Carpenter's Hall and we went to see Betsy Ross's home. In Betsy Ross's home, we were shown a room that was set up with a table and the supplies for her to make the musket balls. It seems the women were making the supplies for the men to use. I had really never given much thought to the women's roles, before that day. Sure does make one think, anyway.

Again, I wish to thank all of our soldiers from the past to the present, whether they are men or women, and their families, for the sacrifices they make each day. 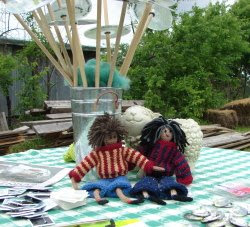 JoJo and Lil' D went with me to Jacob's Reward farm yesterday. We had a fabulous day. I have been Cindy's friend since she first purchased her farm and I must say that she and her family have done a wonderful job. It was so much fun to go over and see all that she has accomplished, since I moved 45 miles away 2 years ago.

This is the sign in table. Cindy had made drop spindles and had buttons with her logo and Susie's logo on them. The girls love the sheep. 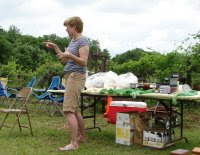 Susie was there from Martha's Vineyard Farm and Hudson Valley Fiber Farm. She gave a demo on dying yarn and that is always a great topic to learn more about. 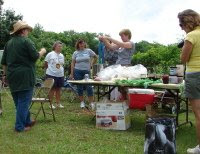 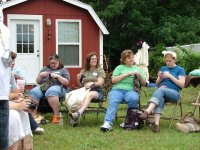 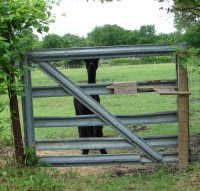 JoJo did get a little tired during the day, so she sat for a few moments on my bobbin for my Ashford Kiwi. I have been spinning on my roving that I had dyed at the Fancy Fibers Retreat. I am almost finished plying and when done I will post the pictures here on the blog. 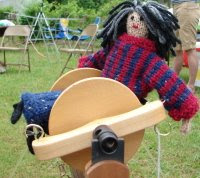 At the end of the day, Sierra, had the best catch of all. Farm fresh eggs. 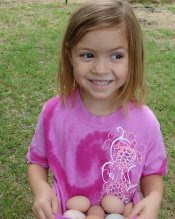 Several weeks ago on Ravelry, a knitting designer decided to have a Mystery Knit-a-long. Sharon, the designer, designs felted handknit bags, purses and totes. When she had the idea for the KAL she was thinking that 100 knitters would sign up. At last count she has 785 members from all over the world!

I decided to join and be a part of this group. I have my yarn ordered and it should be in in the next couple of weeks.

All we know is that we will be knitting a large bag on size 10.5 US needles. We will be using bulky yarn and when done we will felt it. We don't know what it will exactly look like, when done. Each step will be given to us as a clue and we will blindly follow the directions. :) The mystery is part of the fun!

Knitting is to start near the middle or end of June. I will show my progress on here and you can be surprised like me.

Meanwhile, we log into our group on Ravelry and write to each other about current projects our yarn colors and choices, and how excited we are. It is fun to be getting to know knitters from around the world.

If you haven't heard of Ravelry yet, it is an on-line community for knitters and crocheters. It is a place to show off your completed projects and your UFO's(UnFinished Objects). You can join groups of knitters with similar interests as you and also look up patterns for projects you want to knit. You can also see what those ideas look like finished, as someone else has probably already made it and has it posted. Designers can sell their patterns on Ravelry too, and I have many of my designs listed for sale under TerrificFibers.

Mainly, Ravelry is just a lot of fun and a fun place to belong to.
Posted by Joanne at 1:12 PM No comments: 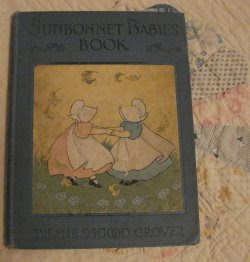 When I was a child, one of my most favorite books had actually been my Mom's. It was the Sunbonnet Babies Book, by Eulalie Osgood Grover. I remember reading this book, a 2 dimensional item, and turning and turning it trying to see their faces. :) I would sit there and try to will it into a 3 dimensional item, so I could slip their hats back and see a cute little face. But, alas, it never worked.
I still have this book and it is the one pictured here. The edition I have was printed in 1928.
Is it any wonder that when I came across this picture on the internet, that I, a spinner and knitter, thought it absolutely a fabulous picture?? Here it is, Sunbonnet Babies, spinning and stitching!