Here in Texas, where people live for football games, it is unbelievable that we actually have 2 pro baseball teams. When I say that people LIVE for football, I am truly serious. They show high school football on the major network channels, local college too. One major TV station actually runs a contest each week, to see which high school game they will show.

Now, to make matters worse, we are in the Dallas Metroplex area. Where the Cowboys reside. I am not a fan of the Cowboys, if the truth be known. But, people in this area worship this team! I am truly serious, worship is the word. :) We have major news stories about them ALL year, even when they are not playing or practicing. People have to know about their team and who sneezes when.

So, being from a home where my dad loved all sports, I don't get this singling out one sport thing. I will watch football, I played in the band in high school and played for the games. I don't always understand them, but I will watch them and KNIT.

I must confess, though, that I don't often get to see a game on TV. But, I try to keep track of their progress and have been very excited for them this year.

Our Rangers, have had a tough year. But, it apparently has been good for them. Because these guys, who didn't know what was going to happen to their team, are in the PLAYOFFS!! The UPS STORE guy has decided to show support, they are wearing hats in the store to show support! 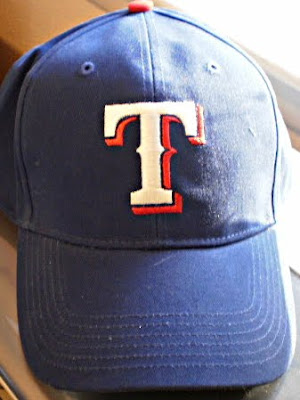 Here is one of my new knitting projects, meet Twisted Sisters' Headband. A winter headband. This pattern was inspired by one that I saw in a fashion magazine. The designer label one was listed for $100. :) I thought, that as knitters we could make these. Mine differs just a bit in the cable design, because I wasn't sure how close to get to the designer's. I have the pattern listed on etsy and listed on Ravelry. 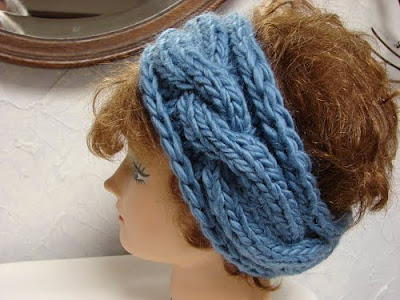 Happy Knitting! And GO RANGERS!
Posted by Joanne at 8:38 AM