Here's my show and tell, finished project. We are awaiting the arrival of our 4th grandchild and we are really excited! Because they live in northern Florida there isn't a lot of need for warm wool sweaters, with a June delivery date.  Don't get me wrong, there is a need for sweaters, and I have made some. I will show them another day. (When the sun comes out and I can get decent pictures again)
This outfit is a crocheted sundress and a knitted shrug. The pattern for the sundress is from Deborah Norville using her Serenity yarn. I found the pattern as a tear-off free pattern, one time while at at JoAnn's Fabrics. When I was done with crocheting the sundress, I decided that baby needed a shrug to go with it. So, I wrote the pattern for the shrug and knit it.  The sheep is for me. It was a gift to me, since I like sheep and I like putting it in pictures. 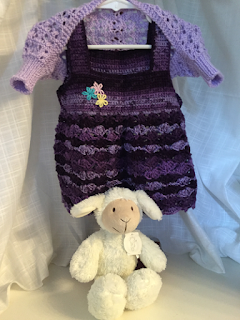 I mentioned about the sun and needing it for some pictures. We are having TONS of rain in Texas. I think I heard it said that it was the rainiest May on record. I have also heard people pondering whether our state had moved to Seattle Washington, or Louisiana, over night and we didn't know it. :)
The ground is squishy and just saturated. It is safe to say the drought is over, cause our lakes and rivers are at their limits. There is a large lake near me, which is over its banks in some areas.
BUT, behind our home, is a pond.  It is full. It doesn't get higher than this, because it will flow over its dam at the far end.  I wanted to show the picture of it. The neighbors dock, across the pond, is sitting in the water. 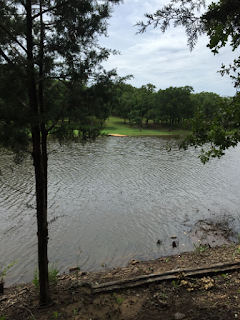 SPINNING!!! This issue of SpinOff magazine, is all about using up your stash! What a great idea. 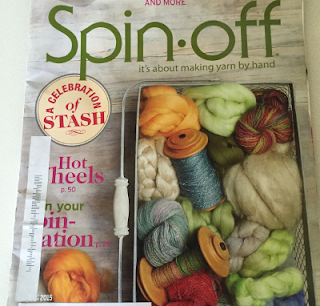 I do have quite a stash of fiber. So I went through it and found enough that would coordinate together that equals just over 2 lbs. That is enough for a sweater. My granddaughter came to visit and wanted to photo bomb my picture. LOL! 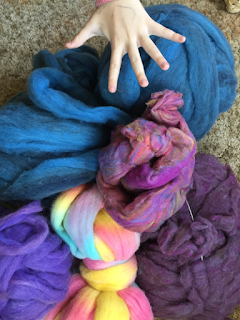 We spent part of the visit splitting up Gramma's wool. We started with the blue on the top, and actually weighed it out into 3/4oz portions. We ended up with about 35 of those. Then we equally split the rest of the colors into 35 pieces. We didn't weigh these. We just folded rovings in half and split, folded, split, folded. When we were done we had piles of wool all over my studio floor, we were dancing in the tulips, so to speak. :)  We took each pile of coordinated fiber and rolled it into a ball for safe keeping, until I can card it on my Ashford drum carder. 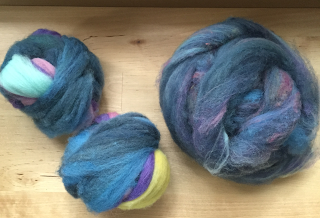 The neat little balls on the left are before it is carded and the one on the right is a ball after all the fibers have been carded together. I will be carding off and on for a while. But, meanwhile, let the spinning begin.