As I was opening up blogger and getting the pictures ready to post, I realized that it is October. Well, I knew it was October, so don't think I have lost it..... :) It just hadn't sunk in and it is only October 2 and it is 89 degrees outside.

But, that realization meant that I needed to find a picture for the top of the blog, so I could take the summery one off. Ack! There wasn't a picture ready in my folder. I thought I could take a new photo of an autumn decoration, but that wouldn't work. My holiday decorations are hiding behind some of the Mr's building materials(read heavy) and they need to be moved. Of course, if I leave them there, I guess I could skip Thanksgiving and Christmas too. LOL! No, I don't think so, well maybe. No.

So, I did what all folks do with pictures in file folders, I found one that I could put into my Gimp program, crop and then posted it. Hence the basket of pumpkins. That is my own pattern, written years ago.

This has been a sad day, as the realization of the shooting in Las Vegas has sunk in. I have been praying for the victims and their families, as well as, the first responders and health care professionals who are working tirelessly to take care of those needing care.

However, I do want to show you some of my current projects.

This first picture is a Be Simple, it uses sock yarn about 400 yards. I was looking for something to knit with this fabulous Malabrigo sock yarn and Be Simple was it. It is like the Kwoosh, only  with eyelets! I am loving working on this project. 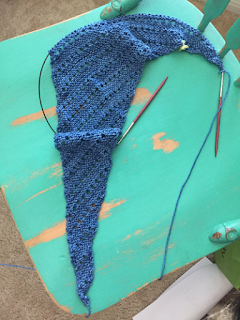 Next is a vest, I think..... I started it about 18 months ago and packed it up to move about a year ago. Unpacked it and left it alone in its basket until about 3 weeks ago. Since I had finished the projects I wanted to finish for the Clear The Needles KAL, I decided to try to finish this. I had only knitted it to just past the first armhole. I have done a lot on it, but the deadline for finishing this was October 1. But, you know, I want to finish it anyway. I not only want to free my needles, but my basket! If I have enough yarn, I think that I may try to add sleeves to it, even if they are short sleeves. All of the yarns, except a solid navy, are handspun yarns from my handspun stash and they are all wool. 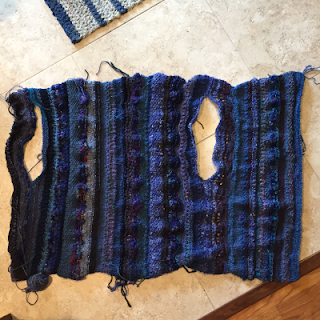