Yesterday, March 20, 2010, dawned to be a fairly dismal day, weather wise. It was raining a cold rain. The rain that happens when the temperature is right above freezing. The temperature was 38F, with a wind chill about 28F. It was the Spin-in day at Jacob's Reward farm. I was scheduled to be helping people get to know their spinning wheels better and help them with any "tune-up" issues they might be having.

So, I loaded up the Blazer and off we went. I made it there safely, in the rain, after sitting on the interstate for a wreck between two other SUV's. One of them had ended up on its roof, the other was still on its wheels.

It was a fun time at Jacob Rewards farm, always is! Nothing like being with other spinners and knitters. 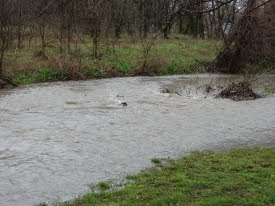 When at Cindy's we meet in the Little Red Barn. It is a great space with her fiber and yarns all around. BUT, behind the Little Red Barn is a small quiet creek. However, we had had so much rain during the night and that morning, that the little calm creek, had become a raging little river! 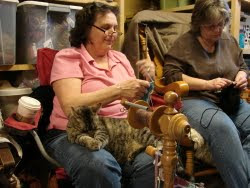 In the barn, Mary and Pam were hard at work on their knitting, while Smokie(the cat) had found a new lap to lay on. 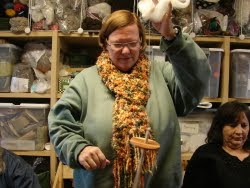 Cindy is trying out a new drop spindle that was handmade by Cara's husband. 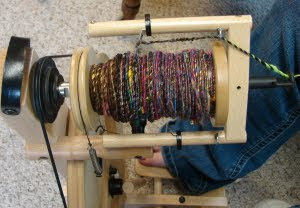 Here is some absolutely gorgeous yarn being spun on a Louet Victoria wheel. That is a cute little wheel and weighing in at only 7 lbs, an ease to carry around. 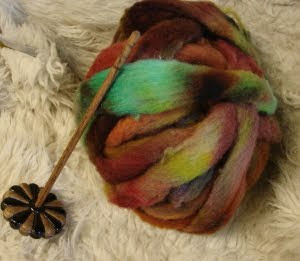 Another handmade drop spindle, made by Cara's husband. (So great to have husband's like this!)
The roving is what Cindy had wanted to spin. Isn't it pretty? Don't know if Cindy was able to get busy on that roving or not.

Then thismorning we woke up to SNOW! Yep, March 21 and we had snow on the ground. The sun hasn't really made it out yet. We expect the snow to melt, today, but right now, it is just being blown around by the stiff north wind. 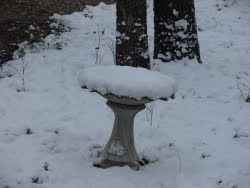 Winter has not given up, yet, in north Texas. 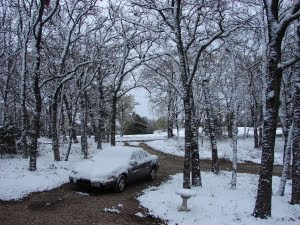