Well, I was up early today. With great hopes of getting to walk a new toll bridge. It was bound to be a wonderful day and fun time. Our oldest daughter, Rebekah, was going to join me. She is usually a jogger and had conceded to walk the walk with me and not do the run. I was totally grateful for that!
The run was due to start at 8:30 am and the walk about 10am. Well, as it was closer to leaving time, thunder and lightening started to roll in. I turned on the news and saw that the first set of 500 joggers/ru 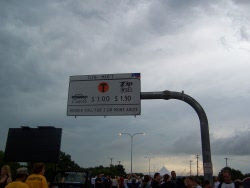 nners had started. The other groups, had been told to leave and come back at 10am. Rebekah was here promptly at 8:45 and off we went. The bridge is only about 3 miles from my house. We arrived and saw lots of people milling around. The rain had stopped and we figured let's go. So, we walked about 1/2 mile to the start of the bridge and found out that the race had pretty much been cancelled. The walk was still on. So, we milled around waiting. Then we heard more thunder off in the distance. The announcement came, that we would be able to walk to the middle of the bridge and then turn around and come back. OK, we thought that would be great. We could see the bridge and the view of the lake. That's OK. Well, then the sky opened and more rain started to fall. Where were the umbrellas? In the car. Yep, we had left them there, because we had thought the rain had passed. We decided we would leave. It was after 10am, runners were back, walkers were arriving and it was raining. People were leaving. There was no word about if we would ever get to walk across the bridge, so we went back to the car. 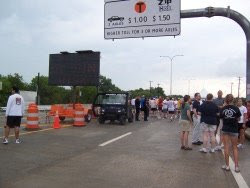 Yes, the 1.5 mile bridge is a toll bridge. The flashing sign in the second picture was flashing something about walking at your own risk. :) Not sure if that had to do with the whole day or because of the rainstorm. But, they weren't letting anyone on the bridge. This was as far as we got.

I wanted to get a picture of the police vehicle(3rd picture). I had never seen this particular one before. I am guessing they use it along the shoreline of the lake. 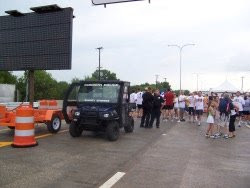 Through the center of the volunteers(4th picture), we could see where the bridge was going, and where we wanted to be...........
The morning ended up nice, anyway. We walked back to th 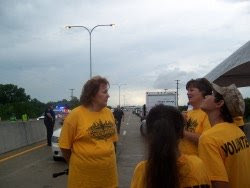 e car, got soaked, and went to Sonic for breakfast. Sonic is a drive-in restaurant, popular in TX. You order through a little microphone at your car and they bring out your food. We figured we were safe, since we were sitting, drenched, in the car and we were not fit for a regular restaurant.
It was a fun time, just being with Rebekah, but we were disappointed not to do our walk.