We Went to the Race!

The NASCAR race, that is. We had a blast. The race was in Fort Worth, Tx, this past Sunday, November 8. We have been to several races and have enjoyed every one. We always come home with a great story or two. 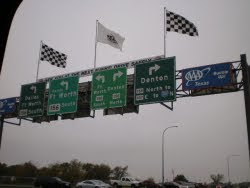 We parked far out from the track, in the free parking section. Under the sign with the flags. We wouldn't forget where our car was that way. Below, in the distance you can see where we were headed to, notice the flags. The cars on the right are people driving in to the paid parking. 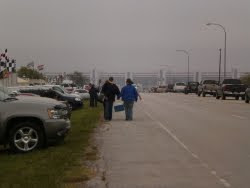 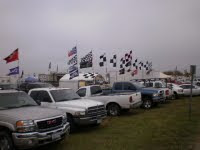 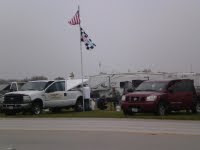 The UPS Store guy wanted to pose with even more flags.(Notice his UPS jacket) 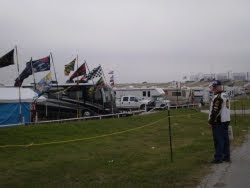 We made it in. It took us a while, but we like to walk and it was fun seeing all the flags. :) Apparently, the campers put them up, so they can find where they are parked. Ok, I get that.
Below, is the inside of the race track from our seats. 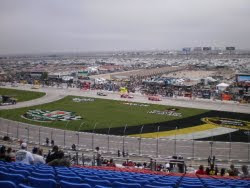 The UPS Store guy, modeling again, this time with his UPS jacket and the UPS sign painted on the track. In the background are the condo's, you can purchase one of those and live there. 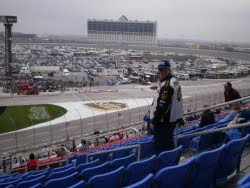 Here we are. OK, now I have to stop making fun of his jacket. You caught me, I am in a Jeff Gordon jacket. Yes, it is my jacket. Actually, I like the whole Rick Hendricks team. They not only have Jeff Gordon driving for them, but Jimmie Johnson, Mark Martin and Dale Earnhardt Jr. 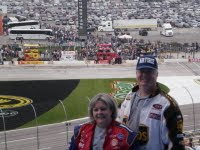 Here's Jeff Gordon's car. :) In front. They are lining them up getting to start the race. He "won the pole." That means he starts in first place. Then the best part of this shot, below, is the US Army star painting on the grass. The race track had that done. You see the terrible shooting at Ft Hood, Killeen, TX was just a few days earlier. The base is about 2 hours south of the track. We had soldiers from the base at the race. They were the ones who unfurled the huge flags for the National anthem. You can see some soldiers walking around the painting. They had just noticed it. They were touched by the sentiment. Stood taking pictures and just staring at it. My heart goes out to our brave men and women soldiers who are trying very hard to keep us safe. 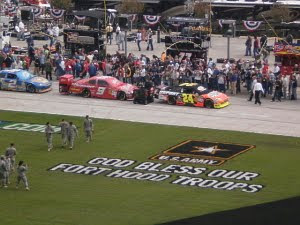 Well, below, we have the UPS Truck! It is parked on the race track. Sorry it is blurry, it was VERY far away. 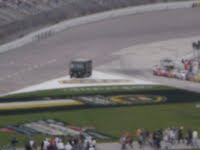 OK, so we are sitting and talking watching everything get set up. We hear a loud rumbling and I mean loud rumbling. We look up over our shoulders and here comes a LARGE army helicopter. It lands on the track. What in the world is going on?????? The back opens up and out drives the pace car! The soldiers at FT Hood, had wanted to deliver the pace car. They wanted us to know that we should have a good time. When they took off the crowd was chearing and waving. The soldier in the very back saw, and waved back. I didn't get a picture, I was waving. 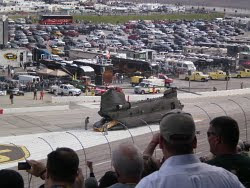 Back to the truck. Guess what, they raced the truck!! It went by so fast, I only caught its back end. But, that is a UPS Truck. 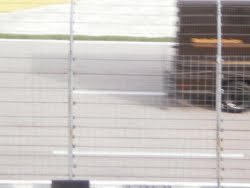 The race is starting. I put the camera away. Besides, I had plenty of pictures now. 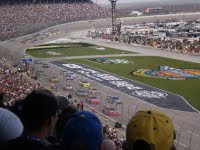 Well, one more picture. They called for a caution flag, for debris on the track. The real reason was the black spot on the fence below. It is a hawk. It came swooping in and landed on the fence. Just sitting there watching the race. Looking down at the cars, as if he wanted one. The officials decided he could cause problems if he did decide to attack a car, that is driving about 200 mph, so they flew the caution flag and scared the bird off. We watched as he flew back up from where he came. 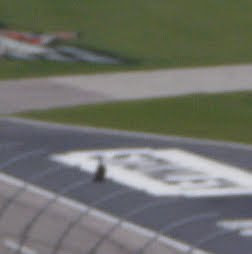