I have been wanting to try Free-form knitting for a long time. I did a crocheted free-form bag, a couple of summers ago, but I didn't like how it turned out. I didn't do a very good job picking the colors. Well, actually I used almost every color I had in cotton. Not a good idea, for me anyway. I have been reading up on free-form knitting and color theory since then. I think I am doing a better job now.

I went through all of my handspun yarn scraps, you know, the balls of yarn that you refuse to part with, but have about 1 or 10 yards of yarn in them? Some of them were in skeins and needed to wound into balls. So, I did that. Then, I organized them by color and pulled out some colors that I like, meaning blue, purple, blue, purple, blue, purple. OK, you have the idea. I did decide to use a neutral color. But, then in looking through the stash, I noticed, not much orange or yellow or even red! Good grief. Well, I did have a little and I think I was able to pull it off. I made the larger cup cozy first(the one on the left), it was supposed to fit the cup on the right. Nope. It was way tooooo big. So, I ran to the kitchen and pulled out my old Dunkin' Donuts coffee cup, with a lid and it fit that cup. Then I made another cup cozy to fit the smaller mug. It worked! I made them in a flat piece and then put some stitching at the bottom, the part under the handle. If you look close, you can see the buttons that I use to button them under the top of the handle. I decided to button them under the handles, because when they were on top, the fuzz gets in your mouth when you drink out of them! I tried it. :) Not tasty.

I had fun knitting these. On the cozy on the left, I didn't have a lot of highly textured yarns. So, I made texture. I did some bobbles and then some of that finger/spaghetti stitch( I forget the proper name). Embroidered some daisies too. On the smaller cozy, there was some mohair curl yarn for texture, but I added a small daisy, a few bobbles and some french knots.

I really like French Press coffee, but my French Press is not insulated. Someone told me that they found one that is, but I have not seen one. For months I have been throwing an old and holey, but clean, hand towel over my French Press to help insulate it. Well, it is very tacky and pretty funny, since I have made, and sold, tea cozies on etsy. I spin wool and make all sorts of items, but I have never made a French Press cozy for myself. I suppose, that is like the shoe makers kids going barefoot. Here is my first French Press cozy. I used a felted wool sweater as the base for the cozy and decided to use surface design to decorate it. I played around with knitting, until I figured out a little flower motif. Then I used french knots to attach them to the cozy. There is a button closure on the bottom, under the handle and stitching at the top, above the handle. I decided to do it opposite of the cups, so that you can pull the cozy up and off, or over and down. I didn't think it would go well trying to fit a full pot of coffee into the cozy. Rather use the cozy and cover the pot, while it is sitting securely on the counter. 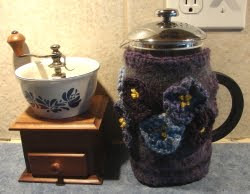