On Dec 1, we had been having some rain. It lasted most of the day and through the night. It was not the typical rain for north-central Texas. It usually blows in, dumps in about 1 or 2 hours and then we are back to sunshine. This fall our weather has been non-typical. The rain on Dec 1, became quiet on the morning of Dec 2. Soft sounds on the roof instead of the normal pitter-pat of rain. I went and looked outside and here is what I saw! Isn't this something? Of course, it was melted a couple of hours later. But, it sure was pretty to see. Snow this early in the season is very unusual for our area, although it has happened before. Just not often. Since it was Wednesday and that is spinning day, I was glad it hadn't stuck to the roads. I could go to spinning! 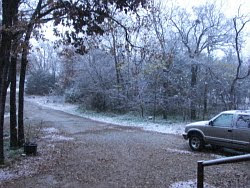 Here is one of my latest knitting projects. I was getting ready to wrap it up for Christmas and thought, oh no, I haven't taken a picture of it yet. So, I quickly took a picture, because I wanted to show you what I had made. It is a scarf similar to Shape It! Scarf in Sally Melville's, The Knit Stitch. My yarn was not as bulky as she recommended, so I ended up using needles a bit smaller than she suggests and casting on a different amount. When I was in NY in September, I had purchased a ball of mohair yarn that had sparkles in it. That yarn is the blue striping. The gray is my handspun yarn. It is the softest scarf! I love the design. Someday, I hope to make more of them. Oh, if you look closely, I also added a little lace stitch at each end of the scarf. 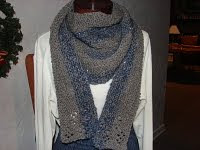