The Ultimate of Spinners, Spins

One day, I went to the door in my studio and looked out. There was Zippedie. Spinning away on a web. I was, at first aghast at the size of the spider and the web, but then I realized that it was what is commonly called a Zipper Spider, and since they eat mud daubers and wasps, amongst other things I decided to just watch it for a few days. Not a bad spider to have hanging around a house in the woods. However, her new home has hindered my coming and going of this particular door. So, Zippedie will probably be moved, not killed, just moved off the door and into the woods.

These spiders are very intriguing, as they spin a web, with a zigzag in it. That part is much thicker than the rest of the web. I read that it is one continuous strand too. But, this human spinner is not going to check that out. Sorry. 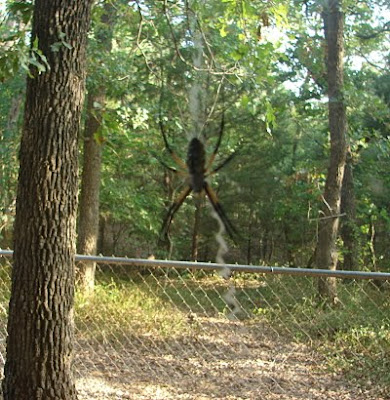 Here's Doo-daa. Doo-daa, is over by the pool. The lighting is better for Doo-Daa and Doo-Daa is smarter than Zippedie, cause I do not have to move this web. It is nicely placed out of the walkway, however, it does sort of give me the creeps when I walk by it. However, I read that the Zipper Spiders are not aggressive. This I know to be true. They must have read on their spider computers that most humans are not aggressive toward them, because they don't even move, when I get within 2 feet of them. They just sit there. Maybe they are thinking, "Oh, good, if she gets stuck in my web, I'll have food for a long time. Maybe she won't notice me." Who knows, but they aren't aggressive. 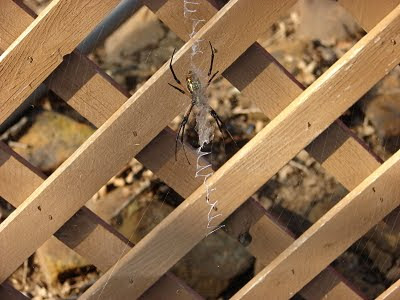 Here is some scientific information on the spinners of all spinners, taken from the Dirt Doctor's website. For more info, follow the link, if you want. :)
Common Name: The black and yellow argiope is also called banana spider, yellow garden spider, zipper spider, golden orb weaver and writing spider. The largest orb weaver in our gardens is the black and yellow argiope (Argiope aurantia). The female is large, the males being much smaller by comparison. Although big enough to deliver a bite, these spiders are not poisonous or aggressive.
Posted by Joanne at 6:19 PM