Now that the studio is done being remodeled and I have moved back in and hung up the pictures on the walls, I was able to set up the sewing machine on its desk and get it going again. It was a bit shocked when I turned it on, and we had to introduce ourselves to each other again, but in the end we were friends.

Before we had even emptied the room out, I had a pattern and fabric to make myself a spinner's apron. Actually, I had 2 patterns and couldn't make up my mind. So, I made one pattern and took it to spinning and it sold that day. :) Then I had a commission to make another one, that was nice! So, back to my apron, I had the 2 patterns and kept tossing it around. Well, the day came and the decision had to be made. I decided to go with an old Daisy Kingdom pattern that I had kept for years.(See a stash can be a good thing!)

Below is the pocket close-up, because I was hoping you could see the sheep. Spinner's apron/sheep, right?? Oh, I didn't use the pocket from the Daisy Kingdom pattern, I used a bigger pocket, cause spinner's can have lots of stuff to put in that pocket while spinning. 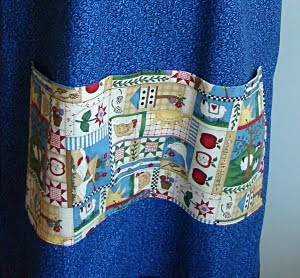 This is the whole apron. It crosses in the back, so you have to put it on over your head. If you aren't a spinner, and even if you are one, you may be wondering why I wanted an apron for spinning. Well, I am just tired of wearing my clean clothes to spin in and then having them covered with wool, mohair, bamboo(especially bamboo) and the other fibers that I work with. I do carry a lint brush, and that does help to get the fibers off of my clothes, but I thought this might be a good idea. It is worth a try and I love blue! :) 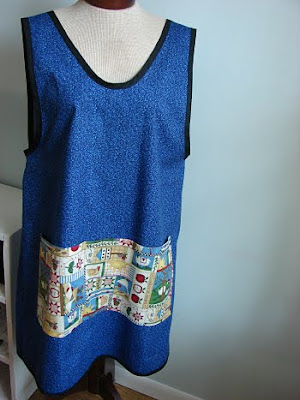 Finished! My Mr.Greenjeans sweater, made from black yarn. It fits and it is done, so that I can wear it when our temperaturs cool off. I am so glad to have it done. I used Ashford Tekapo yarn for it and I love it. 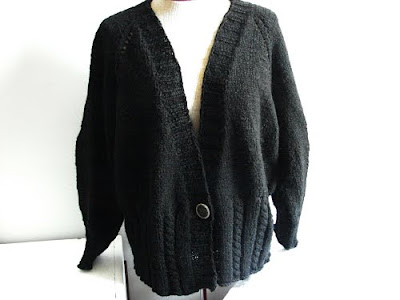 The pattern for Mr. Greenjeans is a free pattern on Ravelry. The designer named it such, because the color of yarn, that she used, is named Mr. Greenjeans. I did change the pattern a little. The neckline was very wide and I didn't want a sweater that would be falling off my shoulders. The sweater is knit from the top down, so when I cast on, I used the smaller needle called for. When done, I tried it on and it was still too wide, falling off shoulders wide. While picking up for the center front ribbing and back ribbing, I picked up across the back in 3 sts and then skipped 1. Thus, having 3 sts for every 4 across the back. It worked! I am very happy with the fit.
Posted by Joanne at 9:22 AM