For my birthday, I received this great little notebook. Being such a computer geek novice, I have used it in limited amounts. Basically, scared that I might break it. :) So, this morning when we decided to go to the local Panera Bread for breakfast, we decided to take our notebooks. Sitting here at the table, I learned some more info about connecting to a public WiFi and then the suggestion was made to open the web cam.

A whole new world has opened up to me!
Behind us was a man who we have seen before, from afar. The first time we saw him we saw him playing chess with a girl and he was using his computer. I was thinking why would a grown man need a computer to beat a little girl at a game?????? After thinking about it, I thought maybe he was a chess teacher. Turned out, that was right, as we discovered this morning. 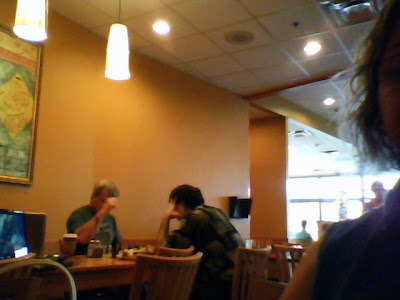